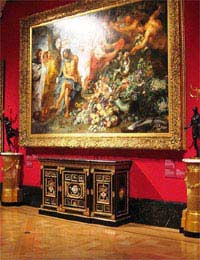 The Royal Collection is one of the most famous and largest art collections in the world. It is often referred to as a private collection. However, the entire collection is held in trust for the nation by the reigning monarch. It’s a wonderfully eclectic assortment of treasures with items ranging from paintings and sculptures to ceramics and textiles. It spans centuries of history and thousands of miles of geography.

One of the most charming aspects of the Royal Collection is that it’s not a chronological history of art. It’s an array of works coveted by a succession of tastes and characters and gathered together under one collection.

Each monarch brought different aspects and qualities to the collection, contributing in various degrees depending on their individual enthusiasm.

The Treasures of the Royal Collection

The total estimated value of the Royal Collection is £10 billion. It comprises 7,000 paintings and 3,000 miniatures amongst many other riches.

Some of the highlights include ‘Triumphs of Caesar’ by Mantegna, the Raphael Tapestry Cartoons and portraiture created by Holbein, Hogarth and Gainsborough.

Charles I was a keen collector of the Old Masters, for example, Rubens and Van Dyck. The Georgian collectors continued the project with works by the Dutch masters and Canaletto. Queen Victoria added to the collection and it has developed through the years with additions by modern monarchs that include artists such as Lucien Freud and Barbara Hepworth.

The Royal Collection is a huge task for the management team. Its fund is managed by a trust and the collection is registered as a charity.

The real value and strength of the collection is that throughout the centuries, it has been safeguarded so that it can be viewed within the context for which it was acquired. It is available for public viewing in Royal residences including Buckingham Palace and Windsor Castle. The Collection is so vast that the items displayed are rotated regularly with other pieces that are documented and carefully stored. The works of art can be seen as they were intended, in the historical framework of the Royal Palaces for which they were purchased or commissioned.

There is a purpose-built gallery at Buckingham Palace, The Queen’s Gallery. This is a permanent exhibition space for the collection. It was renovated from the remnants of a former Royal chapel which was bombed 40 years ago. Another triumph and lesson in effective exhibiting is the formation of the E-Gallery facility. This allows Internet users to view highlights of the collection within a multimedia context.

Apart from the permanent exhibitions at Royal residences and the Queen’s Gallery, the Royal Collection is frequently loaned to national museums and special exhibitions.

The Royal Collection is a national treasure, founded on personal tastes and whims, yet of value and relevance to the entire nation. It is a master class in art collecting and the serious art collector would do well to emulate some of the principles and successes of the collection.