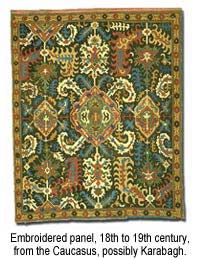 Islamic art grew from the birth of the religion of Islam in the early 7th century. It spread from its origins in Arabia throughout the Middle East and beyond, with examples of Islamic art still visible in countries as diverse as Spain and India.

It has developed and evolved through several eras influenced by the rulers of the day; important eras include the Abbasid, Sassanid, Umayyad and Fatimid periods. Throughout this time, art flourished with the growth of textiles, pottery, ceramics, carving and architectural art.

Art typified by Islam is a pure expression of the Islamic sprit and its relationship with God. It professes to celebrate spirituality and its timeless and infinite qualities. However, it carefully denounces any attempt to replicate the works or glory of God. It achieves this by differing quite profoundly from Western art and other examples of religious art.

There are no examples of religious iconography. This is spurned by the teachings of Islam as a form of idolatry and an attempt to replicate the perfection of God’s creations.

In place of figures, Islamic art depends heavily on patterns and geometry. It is the perfect example of decorative rather than expressive art. This singular quality makes it a very popular focus for lots of art collectors.

Islamic art beautifully expresses the relationship of the Muslim to their religion and world view. The art mainly comprises geometric patterns which are symmetrical, repetitive and logical. This reflects the Muslim belief that the world and Islam are logical, ordered and infinite concepts.

Islamic art is bursting with symbology and common images. The main shapes used are the circle, square and triangle which all express man’s relationship with God and the world. The circle is usually found in the centre or within the basic premise of a work of art. It symbolises the central balance of Islam and unending, radiating harmony which surrounds it. The artwork is embellished by the common images of geometric shapes, floral decoration and calligraphy. The calligraphy often forms an important part of the art, comprising celebratory Qur’anic verses embellished by the surrounding art.

The Growth of the Market

In extraordinary times, Islamic art is enjoying sustained growth. The interest is a positive cultural attempt to close the East and West divisions. It attempts to understand and interpret the place of Islam within modern culture.

Islamic art is a superb expression of the ability of cultural traditions to bring harmony and understanding where politics often fail. The resurgence of interest in Islamic art is set to continue as emerging artists look to Islam as a place of inspiration and insight.