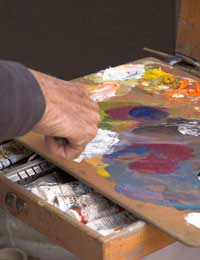 Faking art is a perfectly legitimate action. It's frequently employed to produce reproductions and prints. However, 'fake art' is the crossing of a fine line into a world of unauthorised reproduction and peddling of art with claims that it's something other than a copy. The world of fake art is an incredible and surprising place which produces some amazing facts and statistics.

As long as an artist has been dead for at least 70 years, their works can be freely copied or reproduced. You cannot claim they are the real thing, however.

In the Eighties, A Rubens work entitled ‘Samson and Delilah’ was auctioned for $5million. It was the second most expensive painting ever sold. However, it is also one of the most contentious with a long –running debate regarding its authenticity.

The Greenhalgh family are one of the most extraordinary operations in modern art history. George, 84, Olive, 83 and their son, Shaun were convicted of running a fake art industry from their modest terraced home. During their illustrious career, they accumulated a profit of £850,000. Their most famous success was the sale of a fake Egyptian statue to a museum. They sold the fake item for £440,000!

Elmyr de Hory was a prolific producer of fake art throughout the 60s and 70s. His work has become so highly prized that his fake Matisses and Picassos are widely emulated in their own right.

Michelangelo once dabbled with producing fake art. He sold a work entitled ‘Cupid’ to an Italian cardinal. He faked its age and even buried the piece to achieve a consistent appearance. Once the fake was uncovered, however, he received high praise and further acclaim for his achievements.

Scientific prowess has developed many amazing techniques to help unravel the mysteries of fake art. One such technique is the ability to examine fingerprints which are embedded in the work of art. This information is then used to determine the probability of the painting’s creative origins.

E-commerce has brought new and challenging issues to collectors guarding against fake art. In Australia, a painting by William Dobell sold on EBay for $3055. This was undoubtedly a bargain as the painting is actually worth $20,000. However, the problem was the hapless buyer had bought nothing more than a fake. The true original was already hanging at the University of New South Wales. The copy that was sold was a reproduction misrepresented as an original and created by a ‘copy’ artist, Blundell. In fact, the bargain was really an overpriced mistake as it was really only worth $320!

The Brooklyn Museum in New York recently discovered that about a third of its collection of ancient sculptures is fake! Undeterred they plan to show the fakes alongside the real thing to highlight the perils and prowess of fake art. Visitors will be able to view 4th century treasures alongside 20th century limestone fakes.

There is a village in China solely devoted to mass producing fake oil paintings. Dafen Oil Painting Village has 5,000 artists who produce over 5 million paintings a year. The works are all sold to hotels, restaurants and galleries across the world.

The world of fake art is every bit as fascinating as the facts and figures generated by the real things!