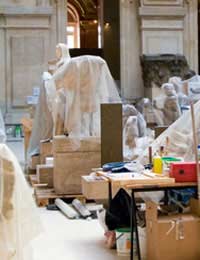 As the arts world involves such huge amounts of money changing hands, for what are relatively simple business transactions (the simple exchange of goods for money), it is open to abuse as much as any other field or industry. If you add to this the high number of forgeries and fakes circulating under the guise of master artworks, it really is not surprising that scandals occur. Many museums that house fakes even have a hand in declaring them to be real, for the sake of preserving their economic value.

There are in reality, both a large number of dubious works circulating, and a large number of works that have been stolen to order or have some other dark past – perhaps the property of Jews killed during World War Two.

The hunt for ‘Nazi Loot’ (works looted by the Nazi’s during World War Two) has stepped up in recent years, with many families finding the resources and information to expose gallery acquisitions as former Nazi thefts. The British Museum, for example, openly admitted recently that four drawings in its collection were highly likely to have come onto the market in this way (three of them having been bought at Sotheby’s in 1946). This they openly admitted, although many galleries are more reluctant to do so.

In 1998 representatives from 44 countries agreed to try their utmost to identify looted artworks, which were stolen during World War Two. For galleries and collectors in some countries this could be devastating, with a significant amount of their collections having been acquired in this way. No doubt, with international pressure, they will happily part with Nazi loot. However, the amount of time that people have happily housed works derived from the plunder (and murder) of Jews goes to demonstrate the criminal underbelly of the art world. It is not uncommon for high end dealers to rub shoulders with villains, as was demonstrated with the exposure of the ‘Medici conspiracy’. Many galleries appear unwilling to get involved in the reattribution of stolen works to their owners (notably, the Museum of Modern Art, New York are unwilling to cast their opinion on an Egon Schiele painting that they previously exhibit, despite it now residing in police storage).

The Medici conspiracy, originally discovered in 1994 was named after Giacomo Medici who, housing stolen goods at his warehouse, sold them to order via a small network to collectors as big as Getty and Guggenheim. A tail led from him to galleries as renowned as the Museum of Modern Art, New York, who were forced to admit that they housed stolen antiquities. Whether or not galleries and collectors acted in good faith is not yet known. However, when rare antiquities come onto the market, collectors should be expected to delve far into their provenance. Failure to do so implies complicity with a shady art dealer underworld.

It seems that scandals such as these are set to continue, due in part to the relatively lax regulation of the world of art and antique dealing and as such, it is worth being wary of the origins of an artwork (even if it is relatively low price). Further, it is worth showing your support for a more just art world, as art is, after all, something that often purports to be ‘pure’ or untainted. This you can do simply by ensuring that all parties in a transaction get a fair deal.