The Big Names In Art Collecting 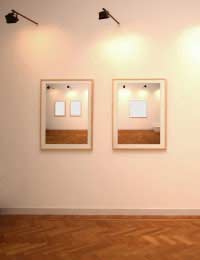 At any one point the English art scene is dominated by just a few major collectors, who both anticipate trends and collect works that fit these trends in a hope that they will make a good investment, or actively dictate the direction that the art scene takes as artists respond to their personal tastes. Most collectors fall into the former category, although Charles Saatchi is one example of that falls into the latter, having had a considerable influence on the U.K. and world art markets since the late 1980s.

Charles Saatchi can be seen to be one of a new breed of art collectors who hold considerable sway in the art scene, perhaps having more effect on changing trends than both critics/theorists and gallery curators. Saatchi (a former advertising magnate) bought his first painting in 1973, and rose to prominence as a collector over the next twenty years, first buying many works by English ‘London School’ figurative painters such as Leon Kossoff and Frank Auerbach as well as Neo Expressionist works, before later becoming interested in a particularly talented and precocious upcoming generation of artists that emerged from Goldsmiths College in the late 1980s (known as ‘YBA’s’ or Young British Artists’). It is artists such as these, including Damien Hirst, Tracey Emin and Gary Hume that firmly established both Saatchi as the world’s foremost collector of contemporary art, and Britain as the centre of the art world.

In an about turn Saatchi sold many of his Damien Hirst works back to the artist (amidst rumours of a rift between the two of them), and has recently begun to support young American artists, hosting a show of their work at the Royal Academy in 2006. Interestingly, it was a show held at the Royal Academy in 1997, entitled ‘Sensations’ that shot his YBA’s to fame. At a time when interest is waning in British art, Saatchi had made a gamble on U.S. art, which if it works, will make him an unprecedented dominant character on the world art scene. Never before has one man been able to shift the focus of the world wide arts scene at will.

A New Breed of Collectors

It is perhaps Saatchi’s success that has spurned Niclai Frahm and Frank Cohen to amass their hugely influential collections. Frahm, still at a mere 32 years old, is one of Britain’s biggest collectors. Cohen, who amassed his collection with the help of Frahm looks set to challenge London’s dominance of the U.K. art scene, if not Saatchi’s dominance of the world art scene, by building a huge gallery in Manchester, FC MoCA (Frank Cohen’s Museum of Contemporary Art). Saatchi, meanwhile, is unveiling his new ‘Saatchi Gallery’ this year in West London, which at 50,000 square feet will dwarf Cohen's Northern counterpart.

These three collectors, amongst others are vying for something bigger than a collector has ever hoped to gain – not only a dominance of the art market, but also a dominance of art itself. A trip around art colleges in Britain will expose the visitor to a magnitude of artworks aimed precisely at replicating the kind of works that Saatchi (and other similar collectors) might like to buy. Artists are – in fact – in the peculiar business these days of anticipating what the collector might do next!

This is a far cry from the days when artists such as Samuel Courtauld aimed merely to spread the influence of impressionism to the British art establishment and public. Up until the late 20th Century it was certainly the collector who was in the uneasy situation of trying to fathom the artists, but for a handful of big collectors this situation has been turned upon its head.