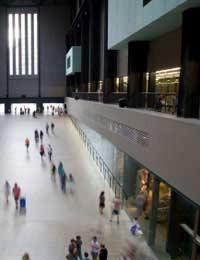 On the back of a booming economy with house prices ever rising and the amount of City millionaires increasing significantly year on year, art really has become big business in the U.K.

It was back in 1997 when New Labour won the General Election to huge public optimism that the economy sharply strengthened to enjoy an unprecedented period of growth in Modern Britain. New Labour's desire to re-shape the political landscape led to a wholesale re-branding of Britain itself as ‘Cool Britannia’. Whilst stars such as Beckham and Kate Moss acted as pop-culture ambassadors, artists such as Tracey Emin and Damien Hirst found themselves at the forefront of a ‘high-brow’ cultural revival.

The completion of the renovation of the disused ‘Bankside’ power station and its transformation into Tate Modern in 2001 further added to this surge in economic and cultural success in London and the U.K. Large and small galleries began to flourish side by side in the up and coming East London, where galleries continue to spring up weekly.

Outside London, The Baltic Centre arts space opened in Gravesend, whilst at the other end of the U.K, the Del-A-Warr Pavilion was renovated and turned into a centre for contemporary arts in Bexhill-On-Sea. Numerous other projects have been completed nationwide, whilst many more await completion.

Over the last few years, the U.K. art economy, kick-started both by cultural re-branding and by the hugely popular 1997 Royal Academy show ‘Sensations’, featuring works by collector Charles Saatchi, has flourished, becoming the World-centre for arts commerce.

Affordable art has become more readily available with many fairs and shows dedicated specifically to art pieces for the home, whilst The Arts Council of England actually provides interest free loans for the procurement of art between the value of £100 and £2,000.

This growth in the arts economy has perhaps been fed at one end by the willingness of big buyers to spend large amounts of money on the arts, and to exhibit their works publicly, and at the other end by the ready availability of the internet, which encourages access to information on the arts. This dual growth in the interest in the arts has led to a grass roots support of local artists in urban areas, a growth in music sales and appreciation (through the downloading of music on the internet) and an increased worldwide audience even for emerging artists on the one hand. On the other hand it has led to an influx of big investment and the movement of artists and works to London and from London to other cities. This growth in the U.K. arts industry is now reflected in a re-emerging Paris arts scene and in a booming Berlin scene.

For the big or small-scale collector this is a very good time to discover new artists, and if you are just starting out it is well worth visiting small scale galleries and trying to secure a working friendship with an emerging artist.

Thankfully, the art economy is not like the housing market. The boom in the growth of the art market will not price you out of the system. Whilst undoubtedly, those artists bought up by large scale collectors soon manage to charge large sums for their work, there is a ready influx of new artistic talent, and unlike new housing, their works won’t reflect the rising cost of art at the high end of the market. For this reason, the huge scope of the current art market presents an ideal opportunity to start collecting art, especially for enjoyment purposes.