Home > Understanding Art > The Relationship Between Art And Money

The Relationship Between Art And Money 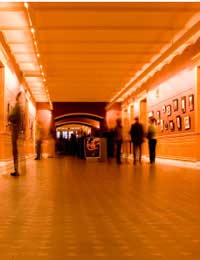 An interesting thing about money is the way in which its relationship to us is completely upturned in relation to reality. Take for example a £5 bank note (though any paper money denomination will do). Across the top you will be able to clearly see the words: ‘I promise to pay the bearer on demand the sum of ‘X’ pounds’, this statement being signed below by the Chief Cashier of the Bank of England. Now, if you are to dissect this statement, what it actually says is that when you hand over money to someone, the Bank of England give you ‘X’ pounds (five pounds if it’s a five pound bank note: the Bank of England pays the bearer (holder of the note) five pounds on demand.

The basic point to remember here is that you don’t give anyone five pounds (or any amount) during a transaction: you give them a paper token - paper money - representing ‘five pounds’. They then give you five pounds (units of) whatever you want. If they give you less they make up the difference with smaller tokens (change).

Money is in this sense as abstract as art itself. In fact they are very similar, as art is never what it itself purports to be. Art is an illusion and token for what it represents, and the relationship between the artist and the art buyer depends on a similar mutual agreement as to the value of the artwork, and the value of money.

The Exchange Between Art and Money

The exchange between art and money is perhaps most interesting because it exposes the abstract nature of money for what it is. Money, whether paper money or coins, represents something intangible and unreal, and something that exists only by the mutual consent of those who use it. The same could be said of art. When the two come into contact, it seems that both can be made a mockery of. Art can become exposed as much predicated on fallacies as money, whilst money can be exposed as essentially illusory.

Ultimately, what occurs is blurring of the boundaries between the two: art, which is ostensibly free and irrational in such a way that it can offer freedom in an otherwise cold and bureaucratic country, is reduced to the same status as money. Money, on the other hand, which is a symbol of a rational and organised society is exposed as pure fantasy – itself just an image printed on paper (or embossed on coins), much like a Fine Art print.

From a art collector's point of view this raises many questions and ultimately points to the trickiness of the art market. The sale of art comes up against the fallacy of art and the fallacy of money. For this reason nothing is set in stone and the value of art is very much dependent on both confidence in art and confidence in money.

Whilst this is so, it remains that art and money do exist and have a profound effect on the lives of people the world over, and for this reason a dismissal of the qualities of either would be unreasonable. A consideration of the link between the two is however of great use to the collector and artist alike!