Home > Understanding Art > The Relationship Between Artist and the Gallery

The Relationship Between Artist and the Gallery 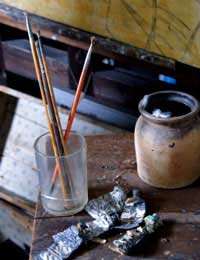 The relationship between the artist and the gallery is perhaps the longest standing artist/institution relationship in art’s brief history (the relationship between art, the church and the patron having significantly diminished over time, whilst the role of the collector is strengthening), and will in all probability continue to be important in years to come.

Galleries first came to prominence along with the development of Modern Art in 18th Century Europe and visiting the gallery was a highly popular pass time in late 18th and early 19th Century Paris. Their emergence was indicative of a new social movement and reflected the modernity of the French state, free from the shackles of Church and the Monarchy (although, to confuse things the monarchy occasionally resurfaced, and the Church remained always in the background!).

The French painting schools, radically eschewing a dependence on religious iconography organised yearly ‘Salons’ in which the best work of the last year emerging from academies and established artists alike, attracted wide crowds and vast press attention. These salons though popular, attracted scorn from many artists who were involved in the final selection for exhibition, the ‘Academie de Beaux Arts’ being seen as tyrannical vestige of pre-revolutionary sentiment (itself developing in the early 19th Century from the amalgamation of several royally endorsed bodies formed long before the French revolution).

The salon (the word itself meaning gathering), although not the first example of publicly displayed art, expressed something of a social ideal with anyone that was anyone making an appearance at the Paris salons, regardless of class. This being the case, it was seen as unfitting that the work exhibited by the salon committee had such a narrow purview. In response to this position Napoleon III himself intervened on behalf of Impressionist artists who rejected from the 1863 salon and established the ‘Salon de Refuses’, comprised of works that had been refused by other galleries, and a blatant affront to the official salon.

This act and the general antagonism of the artist towards the gallery is well documented in Emile Zola’s literary account of the Impressionist movement - 'The Masterpiece'. It also set the tone for the relationship between artists and galleries for years to come, with much Fine Art aiming to challenge the conventions of the gallery space. Duchamp took the sentiment expressed in the Salon de Refuses, by submitting a Urinal to a New York gallery that claimed to have no selection criteria: the piece was refused and Duchamp resigned his position from the committee of the same gallery. Ever since then, attempts have been made to fight against and subvert the gallery environment, with the contradiction being that this is often done with the consent of the galleries themselves.

The 2006-2007 seasons Tate Modern Turbine Hall installation, comprising of a number of amusement park style slides that may be ‘slid down’ by the public (Carsten Holler, Test Site, 2006) is indicative of this trend having reached its apex. The artist often redeems their co-habitation with huge gallery institutions only by producing something that isn’t recognisably art. Of course, the gallery on the other hand is in the position (having paid for the installation of the work) to conceive of the work as art through theoretical manipulation. Even the most radical anti-art statements are eventually bought up by the establishment – with Duchamp, for example, producing several replicas of his original urinal for sale in the 1960’s.

Alternatives to the Gallery

Alternatives to the art gallery are often presented. Such alternatives include outdoor performance, film screenings and outdoor sculpture. Whilst such pieces often involve interesting alternatives to the gallery environment, it is unlikely that they attract an audience much different to that attracted to the gallery. At the same time, the actual theoretical discourse that surrounds art is often seen as central to art being dominated by institutions. The gallery itself may be a red-herring, because wherever the artist displays their work, it is subject to the wider conventions of art-history and arts-criticism.

It seems in many ways that the antagonistic relationship between the artist and the gallery is something of a ruse, with both the gallery and the artist being interdependent on one another. Each generation is liable to play out the same battle between art and institution, with none advancing much further than the one before.

The Artist, the Gallery and the Collector

From the point of view of the collector this relationship is of some interest as it dictates the form of art that is made. Much of what is made to go in galleries is made as a direct statement about the act of exhibiting in the gallery. For this reason work can be cumbersome and impractical to store outside a gallery or industrial art-storage unit.

However, this is far less the case with small scale commercial galleries who aim to foster a working relationship with both their artists and clients (even though there may be an underlying tension between them). A collector is liable to approach galleries such as these or artists directly when buying work.