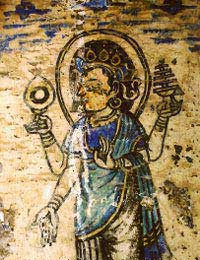 Iconography is both used to refer to the art-historical study of symbols within art and the practice of producing and receiving (viewing or praying in front of) icons produced for worship.

Iconography is the study of cultural forms preceding art and begins with the study of Hindu and Buddhist icons and continues on to the study of Judaeo-Christian icons. The period of icon production was strongest at the height of the popularity of Christianity and though it continues up until the present day with all of the major religions producing icons of sorts, it is thought to have been superseded by the emergence of ‘art’.

The Demise of Iconography

Whilst the production of icons is in demise, the collection of icons by individuals for private collections has never been more widespread. Spiritual practitioners may well have a collection of images and statuettes in the home, but this cannot be referred to ‘art collection’ as such. The collection of art (aside from the financial ambitions that sometimes accompany it) is something done out of love for the artwork in itself and not for any additional spiritual motive.

The decrease in actual ownership of icons relating to traditional spiritual practice in the Western World accords with the rise in reception of art and can actually be linked to the progression of both Judaeo-Christian and secular thought.

The beginnings of Judaism were characterised by a ban in the production of images referencing biblical scenes (this being called Jewish ‘ancionism’, or the ‘prohibition on images’). This quite clearly presents a gap between the heavenly and the human, which is bridged by Christians who feel that they are allowed to produce images of the heavenly for the purpose of worship, partly because Jesus himself, though the ‘Son of God’ was also a physical human being. This led to the mass profusion of images of Jesus, Mary, the apostles and innumerable saints across Europe leading to a sea change in craft production. What it failed to change was the dominance of religion over the practice of crafts such as painting and stone carving.

It was not until a gradual break away from religion during the ‘Enlightenment Period’, which arguably has its roots in the Renaissance, which crafts persons gained the freedom to paint what they wished – something that accorded with individuals hard won freedom from the Church. The history of the development of iconography into art is the history of ever growing freedom for the individual.

These days Icons can be viewed both in Churches and in Museums (such as the British Museum and Victoria and Albert Museum, Oxford), where they can either be appreciated for that element in them that quite clearly resembles art, or can be viewed as objects of worship.

It is important to remember that when art historians or art theorists refer to the demise of the icon, they do not imply that there is a cut off point beyond which the icon has become of no value to us. There are elements of iconography in the artwork, and elements of the artwork in iconography: the artwork bears a quasi religious element, whilst the icon preceded the artwork in its development, influencing what it would later become.

It is also not possible to conceive of the end of the icon completely, because many people still worship religions that employ icons in their practice, whilst many practitioners of New Age spirituality also incorporate the icon into their worship. However, it is still possible to talk of the end of iconography at the hands of the emergence of art because art history and art theory are conventions in their own right that have identified the passing of eras without denying the continued existence of elements familiar to those eras.