The Origins of Art Explained 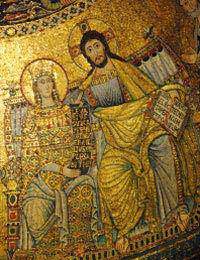 Art has no discernible first date. There is no first painting or sculpture as such. However it is possible to argue that art has a quite discernible remit, and for this reason it is a much more recent phenomenon than logic would dictate to most people.

Whilst it is clear from evidence that ‘Cave-Men’ daubed their homes with paints made from natural pigments and whilst, following this objects were made for ritual worship and clothes and ornaments were decorated for enjoyment, it is not considered that these pursuits constituted the production of ‘art’ as such. To be sure, this has little to do with issues concerning ‘quality’ of craftsmanship - there is much that constitutes art yet does not require any level of craft - skill in its production.

Between the production of artefacts for ritual and magical worship - what amounted ultimately to the production of charms to ward off evil and bring good fortune - and the development of art there was a rich period of ‘Iconography’ that flourished in Europe, reaching its zenith in the Middle Ages. Iconographic painters and sculptors were concerned solely with biblical subjects and to dedicate oneself to producing any other kind of image at that point would have been considered heresy. The only exception to this rule was the painting of portraiture for royalty, and the clergy.

The decline in the power of the church together with increased creative experimentation in the Renaissance period sowed the seeds for what was to become ‘art’, with artists increasingly becoming absorbed in the specific properties of paint themselves, whilst also becoming more concerned with accurate rendering of elements such as colour, perspective and anatomy. Examples of such artists include Michelangelo (b.Italy 1475-1564 and Raphael (b.Italy 1483-1520).

This later led artists to move away from iconography and beginning to paint mythical characters and historical scenes as well as every day life scenes of ordinary people. This partly occurred as both the power of the monarchy and Church across Europe was challenged by the emerging nobility and business classes. A new class with new found wealth and power demanded art to reflect their status, and naturally they wanted to own art that somehow distinguished them from the class they wished to supersede. Artists who fulfilled this role and were patronised either by the newly emerging classes or by monarchs and clergy empathetic to emerging ideals include Rubens (Flemish 1577-1640), Rembrandt (b.Holland 1606-1669) and Velazquez (b.Spain 1599-1660).

The final break away from the Church and the Monarchy came with the French Revolution, considered to be the beginnings of Modernism and Modern Art itself.

The Beginnings of Modern Art

Modern Art developed along with political Modernism and reflected a constant rebellion and revolution in the name of progress. The main impulse of Modern Art is towards the ever new and ever changing. This form of perpetual revolution ties in with its counterpart social movement in its suspicion of tradition. Change, Modernism dictates, is the route to freedom and this itself led to a perpetual breakdown in the boundaries between art, the artist and the widest possible public. Marcel Duchamp’s early 20th Century proclamation that ‘Anything can be art,’ followed by Joseph Beuys’ declaration that ‘We are all artists,’ aimed to bring the art establishment crashing down to earth. Art, Modernism declared, is for everyone and cannot be dominated by the Church, the State, or any one class.

All of these changes in the development of art have an impact on the collector, with growing pressure to exhibit great works to the public, and an emerging market of easily accessible and affordable art. The vast array of different forms of art, many of which are aimed at greater social accessibility and cohesion make ownership of artwork an increasingly complex subject. At the same time choice has massively grown, with artists still producing traditional oil paintings alongside others who specialise in performance, sound art, and so on. Along with this growth in choice and perpetual change in attitudes has come the necessity for the collector to develop a stance and theoretical understanding – at least to a point where they are comfortable with the choices they make.

Being aware of the origins of art brings home the fact that art itself is often a tool used in a battle between one class and another, with the artist either taking sides (usually along with the usurper) or merely going where the money is (artists, contrary to belief, do have to eat!).