Home > Understanding Art > The Impact of Art on Society

The Impact of Art on Society 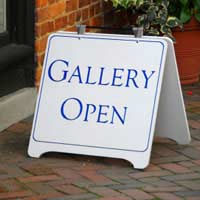 Philosopher Theodor Adorno (b. 1903; d. 1969) saw art as both inextricably linked to society and separate from it. This double character of art is essential to its being and it is this that gives art its unique position of being able to critique society from within whilst remaining autonomous from that same society. This further leads to a position where art is both a commodity, party to the rules of exchange and bought and sold merely for profit, and something more than a commodity – what Adorno terms the ‘Absolute Commodity’.

For Adorno a commodity is something that holds a ‘fetish value’; that is to say, it holds a value far beyond its material factuality. For example, items of clothing, hair care products and ice-creams are advertised as being able to improve one’s career credentials, popularity and sex life. In this sense the commodity has a freedom of its own, yet it is only through the mental projection of the human that this is possible. The human projects ideals upon objects, which it can then own and take control of, thus giving an illusion of human competence over outside forces.

The artwork as the absolute commodity gives the lie to commodity exchange in general. The artwork, which is itself manmade, often from basic raw materials, presents itself as something beyond everyday human experience, and furthermore, as something beyond ownership. Finally it presents a critique of society through its apparent non-compliance with it, despite the fact that it is completely reliant on it. This is why it can be termed the ‘absolute’ commodity: the artwork performs the role of the commodity, but several times over, both providing solace to humanity, whilst also turning away from it and presenting it with its own fallacy.

Adorno’s theory can, arguably, account for the uneasy relationship between art and society, as a kind of love-hate relationship exists between the two. Art is constantly critical of society, whilst all the while giving hope to society and providing images to back up its endeavours. Society, on the other hand, supports art, whilst often resenting both its distance from the everyday, and its lack of obvious skill or purpose when it merely mimics the everyday (as with many ‘ready-made’ installations: see related article – ‘What is Art?’).

Art, Society and the Collector

Despite this contradictory relationship, art and society mutually co-exist, with artworks providing both a valuable documentation and justification of social epochs. Around the artwork an entire industry has arisen, varying from popular culture products such as pop-music and Hollywood movies, to decorative paintings for the home, and large scale Fine Art pieces for collections and exhibitions.

The collector of art in a sense takes it upon themselves to better understand the complex interaction between ‘art’ and society, by appreciating and looking after artworks. They place themselves in a unique position between those that hold that culture should be exploited merely for monetary gain, thereby producing ‘here today, gone tomorrow, tunes and films, and those that hold that art is something pure and should not be owned of such. If anything, the collector ideally must strike a fine balance in both appreciating art for its aesthetic value, and in realising its connectedness to wider society as the ‘absolute commodity’.