Buying Art For Your Home 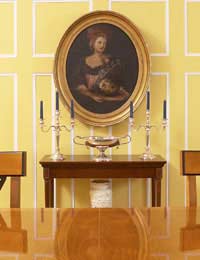 If you are new to collecting art it is liable that you will be collecting art for your home, which is something that may considerably impact on decisions and purchases that you make.

Collecting art for the home, far from being an unnatural or inferior form of collecting art is in fact very much the most common form of art collecting, major public collections often containing works formerly acquired for large scale home collections.

The presence of art in the home, from the early beginnings of art, signified not only wealth, but a freedom and autonomy from the Church and state institutions that had previously dominated the ownership of the man made image. In this sense, collecting art and displaying it in the home is one way of conveying a sense of who you are – your art reflecting your personal tastes and opinions.

A Sense of Place

There are few people that do not exhibit in their houses certain forms of 'art', even if only in the loosest sense of the word. From the posters that adorn teenagers bedrooms, to ornaments adorning living room mantelpieces (sometimes of an iconographic nature), most houses contain images and objects to entertain, to inform, and to provide consolation. These are generally reflective of the persona that the individual who chooses these images wishes to convey to those who enter their domain.

The collecting of ‘art’ itself is often ultimately carried out in this spirit, with the added attraction that 'art' represents notions of freedom. Collecting art, for this reason lends itself to liberal and middle class notions – an art collector is, in a sense, ‘down with' the latest trends, enjoying the status that having their own collection affords them, whilst being politically and socially aware: almost a patron of the arts.

All this aside, you will get the best out of collecting if you choose merely what you like, without a view to impressing your opinions and tastes onto others. By doing this you can develop a home environment ideal for living in, being surrounded by art that you feel a genuine conviction for.

If buying for the home much will depend on the size and shape of your house. However, if you are to be a serious collector it is important not to plan too much around the requirements of a house, unless you plan to be there for a while. Aspects such as the colour of your rooms should not make you wary of choosing an artwork that you would otherwise go for.

However, things such as the size of your doors and windows, as well as the width of your corridors should be taken into account. If you can’t physically get an artwork into your home there will be little sense in buying it in the early stages of starting a collection.

How To Commission an Artwork Direct From an Artist

How To Find Affordable Art For Your Art Collection