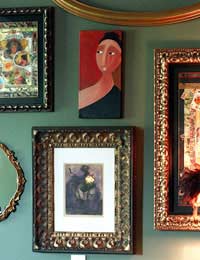 Putting a value upon an artwork is something dependent on many different factors. There are in any case, two essentially very different forms of valuing as work:

How a work is valued, or how much it is valued is a question that most often arises between people engaged in some sort of exchange – either of ideas, or of money. From an individual perspective, the question is rarely ever significant: one simply likes an artwork, or doesn’t.

In the presence of others, as a means of conversation, or as part of a more rigorous theoretical debate, arguments as to the qualitative value of an artwork often take place. These discussions often incorporate art-historical facts and philosophical inquiry in order to back up their claims. Even so, arguments are generally ongoing with no definitive framework upon which one can assert the superiority of one artwork over another.

When it comes to putting a value on artworks that are generally agreed to be ‘great’ (such as the Mona Lisa, Van Gogh’s Sunflowers, or Duchamp’s urinal) it is generally agreed that they are ‘priceless’, or beyond value. This even extends to them being considered beyond verbal or written description.

One interesting twist in debates surrounding the value of artwork, or of art in general, is the notion (linking to 18th and 19th Century German aesthetic philosophers Kant and Hegel) that art is value-less, and that this is its specific charm. Of course, such a notion contrasts starkly with the amounts of money that are spent on art these days, yet perhaps there is a link between the qualitative and quantitative view of an artwork. To own something that is beyond value, or value-less is impossible (one cannot own art), and perhaps it is this that appeals to people with huge amounts of money to spend. A pretence to owning the un-ownable is a display of status.

Putting a Value on Your Artworks

Putting a quantitative value on your own artworks will be necessary at some point, both for insurance purposes, and should you decide to sell a piece. Many auction houses provide a free valuation, as will insurers, yet be wary as to their motives – any valuation conducted by a professional may leave you out of pocket. As with all things, selling art to other traders will invariably bring in less money than selling directly to an individual.

When pricing things yourself and selling directly (thus cutting out the middleman) never be afraid to price high. If the artwork that are you selling is of a high standard, someone will be prepared to buy it – if not they will name their own price, so pricing high will benefit you in the end.

Other major factors in the pricing of an artwork depend on the current (and projected) success/development of an artist. A good way of judging this is to survey prices of similar works being sold.

Finally, valuing artworks, both from a qualitative and quantitative perspective is a very subjective experience, yet one that is largely determined (on a grand scale) in any era by a handful of prominent academics, curators and businessmen. Despite this, nobody has, or should ever have, the monopoly on evaluating the quality of artworks. Confidence and a belief in ones own judgement is sufficient enough for making adequate valuations of whatever kind.

How To Host Art Events

Your Art in Context