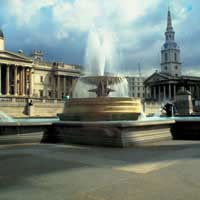 The U.K. has a large and successful gallery scene housing some of the best works from around the world, and dating from antiquity to the present day. Whilst many of these galleries will not house works for sale, the show they put on, and the permanent display that they house are indicative of the shape of the art scene, both as attitudes towards old works change, and new works and styles develop.

The Shape of the Gallery Scene

The U.K. art world is dominated by just a few major galleries – what they exhibit has a trickle down effect often governing the direction of conversation and debate across the U.K. – and even international – art scene. Some of these galleries have been in activity for hundreds of years (such as the National Gallery, London), whilst some the most influential galleries have emerged relatively recently (such as Jay Joplin’s White Cube and The Saatchi Gallery).

It is perhaps possible to view the art world as operating on several different tiers, from the very top, which is dominated in any country by generally one modern and contemporary art gallery (in the U.K, Tate Modern) and one gallery holding a selection going back several centuries (The National Gallery and The National Gallery of Scotland). Aside from this there are major regional galleries, such as Tate St. Ives, Tate Liverpool, and the Baltic Gallery, Newcastle, that aim to focus the art scene in a particular area.

As well as these, are major antiquities museums, which have a constant, but fluctuating influence on artists, such as The British Museum, and The V and A museum. Galleries such as the White cube, the Victoria Miro gallery and many more hold terrific sway since the boom in the London art market in the 1990s. These galleries are followed by tens of trendy East End Galleries, many of whom have stolen the limelight from small collector focused galleries in the West End (though there are still many of these that are worth a look, with an impressive clientele and base of artists). These galleries are often commercial and should be an early port of call for an aspiring collector. Following this there are successful and influential galleries in cities across the U.K, commercial and public, many of which suffer as a result of the 'London-centric' nature of the art world, but many of whom are beginning to enjoy increased wealth and attention due to the buoyancy of the art market and the growing confidence of many British regions, some with newly acquired legislative powers.

From a point of view of maintaining awareness of both art's history, and of current events in the art scene, a survey of just a handful of major galleries may well suffice, whilst building up contacts with smaller galleries can help you to build a collection and observe developments on a more grass roots level. You will find in this way that many emerging artists respond naturally to the bulk of what is exhibited in major institutions by directly referencing art's history, or by maintaining a stance that is either openly hostile, or merely indifferent to the dominance of major institutions in the art world. The way in which artists respond to art as an institution (embodied by the major gallery exhibition) is central to an understanding of both Modern and Postmodern art.

A look at galleries and the development of links with galleries of all sizes should enable you to get a better feel for the arts scene, whilst gallery staff may well be able to point you in the right direction in order that you may start or further develop your own collection. See below a list of major galleries, with contact details: